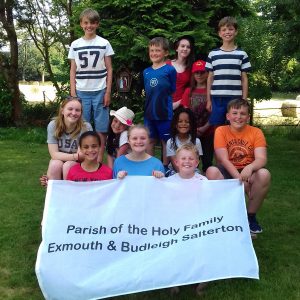 Blazing hot skies and an England World Cup match couldn’t stop our two teams – Austen’s Angels and The Blessed Six, from getting stuck in to the action at this year’s Youth Rally in Honiton.

Taking place in the grounds of St Rita’s Conference Centre, the teams could take part in a variety of events from skittles to netball, penalty shoot-outs and even a tug of war. It was also an opportunity to make new friends from across the diocese with churches from Okehampton, Sidmouth and Exeter well represented.

Our merry band of 12 were slightly disadvantaged as we had to play children that were younger in both teams (our 8-12’s had a 6 and 7 year old in and our 12-17’s had a 9 and 10 year old!). However, we had some individual successes with a Gold medal for Maddie in the Skittles and two netball medals for the Needham boys – Henry with a Bronze and Ralph with a Silver. Our Blessed 6 team also won Bronze medals for the ‘It’s a Knockout’ challenge.

The afternoon was capped with a BBQ and later a Mass on the field to finish the day off. All in all a great afternoon with the youngsters keen to go again next year as they have their eyes on the Cup!