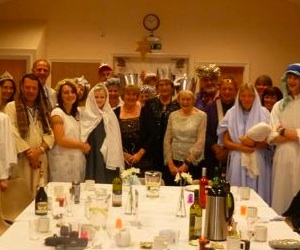 On the evening of Saturday 19th November I was invited to witness an event in the little known area of Exmouth called Bethlehem (aka The Church Hall in the grounds of The Holy Ghost Church).

Members of the Catholic and non Catholic community were attending a “Winter Warmer” to raise funds for the Church’s heating costs BUT the theme of the evening was “THE NATIVITY”.

I arrived early and can say that I have never seen so many angels and shepherds gathered in one place.  There were at least 2 kings and somehow a donkey complete with carrot and a sheep got in past the 2 Innkeepers.  A midwife from “Bethlehem Delivery Services” was on hand and 3 Wise Women were also in attendance.  Unbelievably King Herod arrived but was unable to find his invitation so gained entry by saying he was the Parish Priest!

The assembled host were served a 3 course meal, coffee and liqueurs by a very attentive band of ‘stars’ – the young people of the parish.  In between courses everyone watched a film called “The Nativity” a brilliant comedy about a ‘failing’ Catholic Primary school’s attempt to put on the annual Nativity Play.

Very wise people in the vicinity had borne gifts which were raffled to boost the funds and the whole evening was enjoyed by everyone there.  A special vote of thanks was given to the amazing food which had been prepared by members of the “Census Catering Corporation” and the entertainment was provided by Bethlehem Event Productions.

I have to report the evening was a resounding success and am left wondering what headline grabbing event might be planned for the end of December – watch this space!!