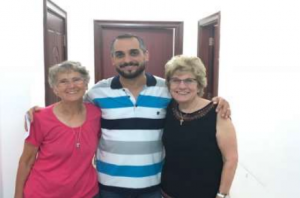 Parishes for Peace – Madaba Update July 2018 After arriving in the early hours, Della Shenton and I settled into our rented flat in Madaba. Della is the PfP Trustee responsible for the Madaba area with about 120 Iraqi Christian families in Madaba and a further dozen or so in/near Amman. Della works by personal contact and listening to the refugees who are so often regarded just as numbers by the UN and large charities, and Della and her excellent local assistant got started immediately with several long sessions selecting 10 students from those who had applied for the intensive short course in English at the Cambridge School in Madaba. English has been asked for by refugees to give them a start in rebuilding their lives with possible vocational training in Jordan whilst they wait for resettlement in an English-speaking country. Learning something so valuable gives them hope and a pathway for the future, as many have already been waiting in Jordan for up to four years, unable to work as refugees due to UN rules on refugees in transit, and the Jordanian Government’s wish to protect the livelihoods of its own people as unemployment is high.

Feedback from the Iraqis who have already been resettled (mostly in Australia) indicates that a reasonable standard of spoken and written English is vital, both for visa applications in the first place and the ability to work and the other practicalities of arriving in a foreign country. A further course in Madaba leading to the Cambridge Certificate in English is planned for 2 terms starting in 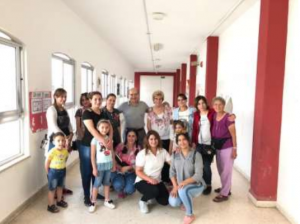 September and Parishes for Peace hopes to fund up to 40 students who have sufficient basic knowledge and the staying power for a long course with three sessions a week. Funding will be by individual sponsors who will also become friends and encourage the students who are being selected during this visit. Sponsorship is invited for the fees, books and exam – the total cost per student is £400, but part sponsorship is also most welcome. The specs collected by Holy Family parish are being displayed at the selection venue and some have already been chosen by refugees needing new glasses.

We visited one family who now have their visa for Australia, who have been surviving by making rosaries – they now speak English quite well thanks to PfP’s own courses in the last two years, and are a delightful, well-motivated family who will surely do well in their new country and be an asset to any community they settle in. Another family came to spend the day with us. The whole family, like most Christian refugees, have an amazing level of faith (2 daughters are members of Focolare movement) and left Baghdad when things started to get difficult and dangerous, and settled in Erbil where the children completed their studies before deciding in 2016 that they would have to leave Iraq permanently. (Could we, as a parish, “adopt” and help this family?) We visited the families in Ashrafiyeh to distribute a “Beautiful Woman” voucher and £20 with a present to each – both intended primarily for the women’s needs and some food. Pretty well all International Government funding goes to the major refugee camps housing the Syrians and some Iraqi Muslims but for safety the Christians are in the parishes, not in the camps, and rely on the Christian charities to help them. The major charities’ help (rent and a little food money) is erratic and many struggle to survive and are obliged to work illegally. Once again a wonderful meal was provided – they are so generous with the little they have. A member of the family needed a consultant’s appointment to make a final diagnosis of his medical condition which was suspected as rheumatic fever. Caritas could not afford to send him and PfP leapt to the front with parish donations and provided the money. Della went with him to the Doctor and to see him through the laboratory tests. PfP does quite a lot of advocacy for refugees especially for those with medical needs.

Another refugee with a brain cyst needed funding for a neurologist’s opinion on options for treatment – a health issue does not go well with visa applications because of the cost implications for the receiving country. We were able to provide the funding and he has the appointment next week.

Madaba Catholic parish is amazing. It is a young, lively and very active and committed faith community with all age groups fully involved. There is a large Scout troop of 180 who fundraise 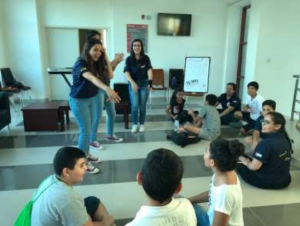 and organize all the major parish activities, liturgies, youth choir and instrumentalists (even bagpipes!), who played at the wedding we were privileged to be invited to. Each year they organize a 3-week camp with many different activities for the children of the parish (which we were able to visit – the children clearly enjoying themselves) – over 250 of them, at the Christian University of Madaba which belongs to the Latin Patriarchate of Jerusalem.

For political reasons the name had to be changed from “Catholic University of Madaba” to “American University of Madaba” with American accreditation – even in Jordan where Christian-Muslim relations are still good on the whole. Christians are wondering if they will be the next to be persecuted for their faith – they wear their faith with great pride. Even in my 2 weeks in the parish I felt very welcomed and part of the community, with the wedding, blessing of a newborn baby and lunch with Fr Butros, the parish priest.

Future plans:
The Jordanian economy is poor; and with few natural resources the Jordanians rely heavily on tourism, and although very safe, tourism has been affected by the wars in surrounding countries. Most work very long hours just to survive and scrape a living.
Welcoming to safety over a million refugees from Syria and Iraq into their midst (at the parish Christian school, 1/3 of the pupils are Christian refugees) has added to the strain on the Jordanian economy, water supply, electricity and the cost of living ; and PfP is mindful of the need to help the poor of the parishes whenever and however it can.

Donations:
Any contributions from Exmouth are allocated for the support of Madaba area families, unless specifically given for education/student sponsorship. Please send to Parishes for Peace, 4 York Villas, Babbacombe Road, Torquay TQ1 3SJ.