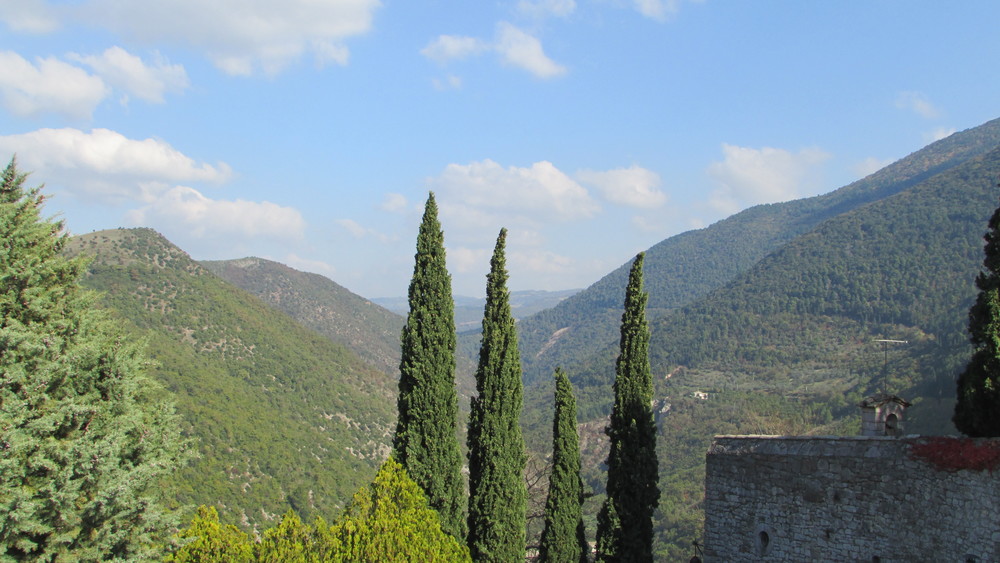 It was the perfect end to the Rome stage of this year’s pilgrimage, being ‘waved off’ as it were by Pope Francis gliding past in his pope-mobile during the Wednesday morning papal audience. A sheer joy for the ‘Holy Ghosters’ assembled by the barriers in St. Peter’s square (you know who you are!!). And so onwards to Assisi for the peace and tranquillity promised by the world heritage site which was St. Francis’ home town and the final resting place of his kenotic bodily remains.

The evening coach ride was through heavy rain and misty hills, arriving in the dark but with the lights of Assisi resplendent atop the rocky outcrop. The group transferred to mini-cabs and our final accommodations, whether the ’Suore Francescane Alcantarine’ convent, the convent’s ‘overflow guest extension’, or the Albergue La Rocca on the highest part of the town. The narrow cobbled streets and stone buildings producing the magical atmosphere of homeliness that permeates this special place.

Now, this review is not going to be a daily log of who went where and when. Meaningless to those not on the pilgrimage and self-evident to those who were! If I may speak personally, this trip WAS a pilgrimage. There were holy-days but not a holiday. By this I mean lots of inner reflection and ‘Work’ on the dark spots of my mind, (not ‘soul’ which is different), where all harm becomes self-harm. The seamless garment running through the week was, of course, the daily Mass, celebrated in the most profound locations which Father Philip had secured. Although not a Roman Catholic myself, I can share in and appreciate the central importance of this holy sacrament in building a community and holding us all together. An embrace in which, despite any niggliness or mis-understandings amongst the individual members, the whole is utterly more than the sum of its parts. Love is, and was, the bottom line here.

When ‘canvassed’ people most frequently spoke about the sense of an ‘ecological spirituality’. For example, many walked up to the hill-fort castle ‘La-Rocca’, which affords spectacular views over the surrounding valleys and wooded hillsides. In the distance, the ‘Carceri’ where St. Francis and the brothers roamed and slept in the open and which our group visited and sang together the Franciscan hymn “All Creatures of our God and King”. Similarly, some visited ‘La Bocca’ where beautiful walks may be taken to see the restoration work in progress to re-forest an area of hillside commensurate with how it would have been in St. Francis’ lifetime.

Another favourite destination of our pilgrims was the church of San Damiano, where St. Francis prayed in front of the now emblematic, wood and canvas crucifix which ‘spoke’ to him. Asking him to rebuild God’s house which was “in ruins”. This was also the home of St. Clare and her sisters and despite now providing accommodation for male Franciscans, is still suffused with the the complementarity provided by the feminine aspect of spirituality. i.e. The care and concern of our ‘Mother’, whether that mother be Mary, the Church or the Earth itself.

Talking of ‘Mary’, Mary Fagin was the life and soul once again! Full of fun, she and the universally acknowledged as beautiful Sister Assunta, led a fabulous evening of singing and line-dancing, aided and abetted by the impeccable ‘Derek Astaire’ and ‘Ginger Richards’!! Not to mention a magnificent ‘sweepstake’ where prizes were to be had for everyone. Helen secured the ‘top-prize’ of a multi-coloured African canvas bag (which I actually think Terry had his eye on) but as fortune would have it, consolation was on hand for all, with ‘Our Lady of Fatima’ wall plaques!

The communal meals, as always did not disappoint. There was a particularly delicious spread on the last night, which was a much appreciated and enjoyable affair during which the group wished to express their heartfelt thanks to Father Philip and Jane, (by offering a gift of thanks), for the enormous effort involved with the logistics of allowing us to accompany Father Philip on his annual pilgrimage!