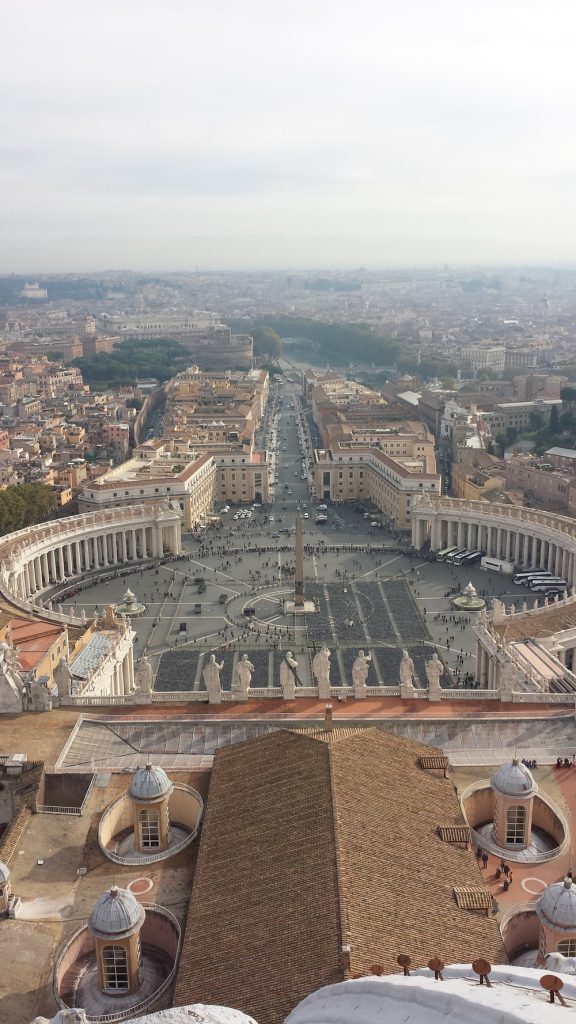 On a grey October morning, a group of 49 pilgrims – some ‘first-timers’ – gathered outside Holy Ghost church for an 8-day pilgrimage to Rome and Assisi. Every stage of our journey had been meticulously planned in advance by Jane and Father Philip and we arrived in the ‘eternal city’ tired but happy and looking forward to an unforgettable experience. We were not disappointed: within a full programme of visits to magnificent churches, ancient monuments, meals out in local restaurants and much walking, there was also time in which to relax and be alone with God and there was no pressure to take part of any of the excursions if we felt the need for more personal space.

Our bright orange backpacks which had not, initially, been received with enthusiasm by all of the group, proved to be a total blessing as we made our way through the crowded Roman streets and piazzas and helped us to identify members of the group we had not had contact with before, and so new friendships were formed. One of our younger members, Emily, described it as a time ‘full of laughs, experiences and memories’.

One of the highlights of our visit to Rome was the privilege of attending the Papal Mass in St Peter’s marking the end of the Synod on the Family and even this had its surprises: in the overwhelmingly ornate surroundings of the Basilica of St Peter we witnessed a scene of extraordinary simplicity as the Pope and the Synod Fathers processed in, all uniformly attired in green with unadorned white mitres, Pope Francis himself only distinguished by the crozier he carried. This image of humility was one that led us naturally into the second stage of our pilgrimage, to the birthplace of the Saint that Pope Francis so much admires.