The last days of the Centenary week allowed no chance to relax.  From 1st May, when the church was decorated for the Festival of Memories and Flowers and opened every day to visitors,  to the 10th May Hog Roast, there was a tremendous effort by all involved.

The day after the Centenary Masses, it was the day of the Parliamentary Elections.  The Parish Hall being a polling station, Thursday 7th May saw a steady stream of voters entering Raddenstile Lane, many for the first time. Holy Ghost church was open, with parishioners on hand to invite people in after they had cast their vote. Very many welcomed the chance to step inside and admire the beautifully decorated church. All the comments were very complimentary, but it was also a great opportunity to talk to people who knew little about Holy Ghost and the Catholic Church in general. 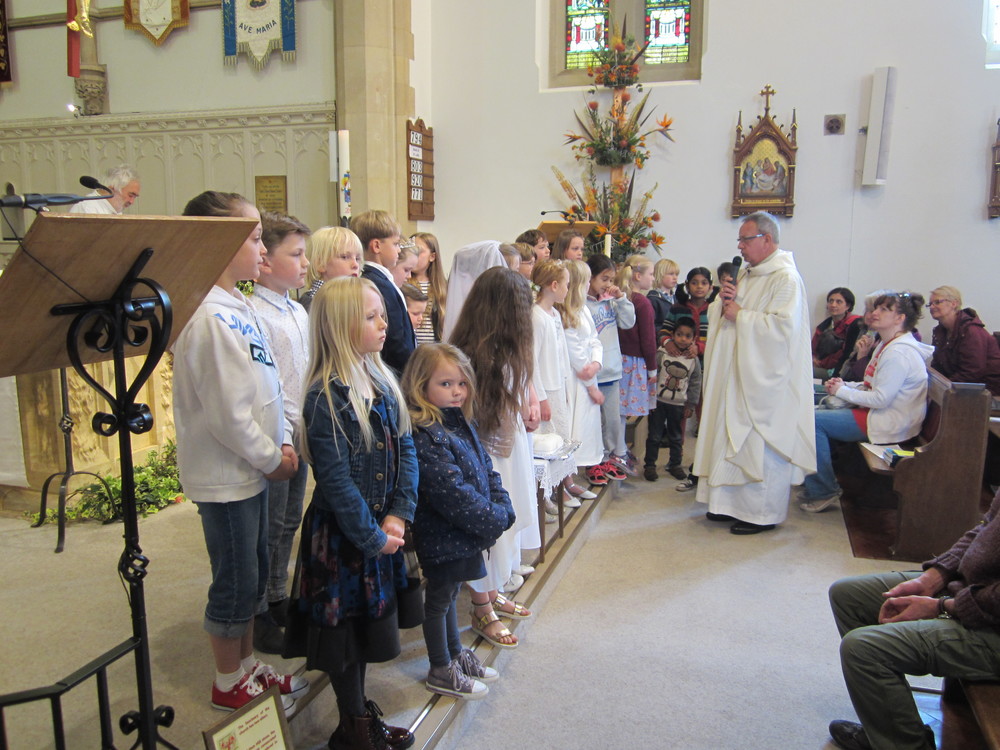 On Saturday 9th May, the First Communions took place, and on Sunday 10th May many of the children at the 11.00 Mass took the opportunity to wear their communion finery again. After the children’s Liturgy the children assembled on the altar, and one of the Centenary cakes was ceremonially cut. Father Philip talked to them of the continuity of this community, and the possibility that in twenty years time they might be bringing their own children to Holy Ghost.

Following Mass, 150 people stayed on for a wonderful Hog Roast lunch – Excellent Roast pork with stuffing, apple sauce and crackling (by Krispies of Exmouth) and an extensive buffet of salads and desserts, made and served by a tireless team of parishioners.  Unfortunately, the sun scarcely made an appearance, so for those unable to get seating in the Hall (priority was rightly given to more senior citizens) it was distinctly chilly, but the lively folk music provided by ten violins  and 3 guitars cheered those in the food queue. The children were too interested in the face painting and games to notice the temperature, and it was a perfect party atmosphere to end a somewhat hectic week. The 50/50 “tube” raffle raised exactly £100! and the lucky winner was one of the children.