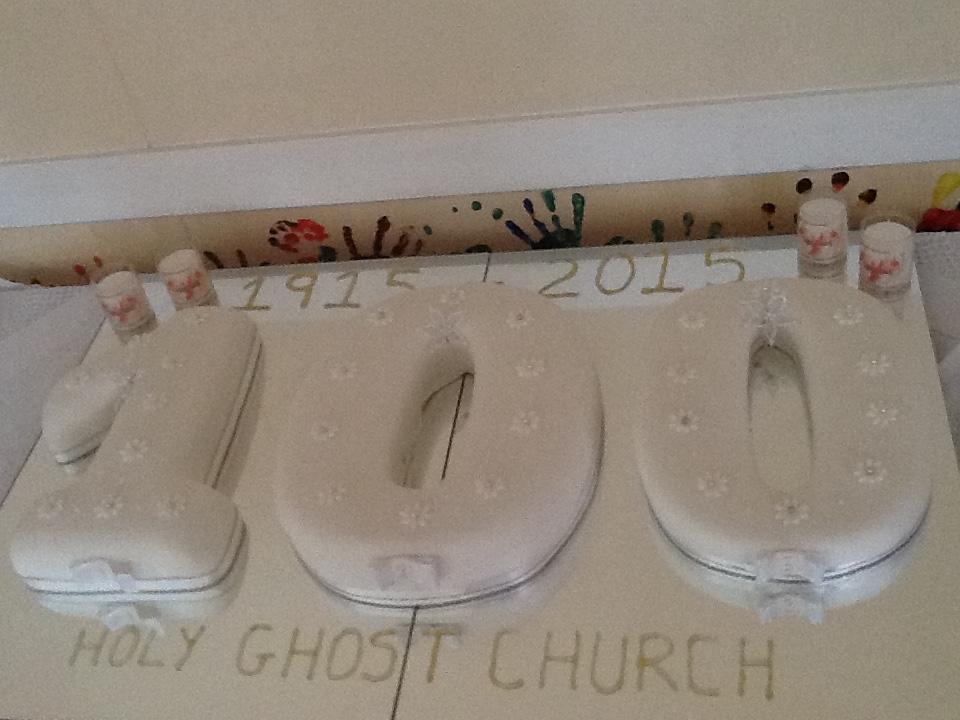 One hundred years ago, on 6 May 1915, in a ceremony lasting nearly five hours the Holy Ghost Church was solemnly consecrated. One century later, on 6 May 2015, this Consecration was joyfully commemorated with not one, but two Masses.

Holy Ghost Church looked especially beautiful, with glorious floral arrangements gracing many parts of the church.  Banners to commemorate different groups past and present hung high on the walls of the altar, and the Centenary banners, Community and Spirit,  hung from the organ gallery below the magnificent centenary window. The children’s Centenary banner and the many doves which have hung in the aisles since Pentecost last year, affirmed the Holy Spirit.

In the morning, the 10.00 am Mass was attended by parishioners and Years 3 to 6 from St Joseph’s school.  The children presented the offertory gifts, and led the joyful singing. Mass was concelebrated by Father Philip and Father Barry Hallett, Parish Priest of St Joseph and St Wallburga, Parkstone. Many parishioner remembered Father Hallett, as he was curate at Holy Ghost from 1986-1988, when Father Dorrian was Parish Priest. He was the last curate to serve this parish.  Mass was followed by a reception in the Parish Hall.

For the evening Mass, many parishioners were in their seats well in advance. Notable guests included the Mayor of Exmouth, Councillor Bill Nash and his wife, Mary; the Mayor of Budleigh Salterton, Councillor Caz Sismore-Hunt and her husband Glen; the Holy Family Sisters and their Provincial, Sister Irena; and the Lindsey-Clark family (Philip Lindsey-Clark created the Crucifix above the altar, and Michael Clark the statue of St Anne and the head of Canon O’Malley, in St Ann’s Cloister.)

At 7.30 Bishop Mark O’Toole, Bishop of Plymouth entered in solemn procession. He was preceded by four young altar servers, Deacon Terry Enright, Father Philip and 13 other priests, among them Father Jonathan Stewart and Father Peter Coxe who had been ordained in Holy Ghost church.

Father Philip welcomed those present, and thanked the many who had worked so tirelessly both during the Centenary year, and in this climax to the Centenary celebration.

Bishop Mark presided. Much of the Mass was sung, and older members of the congregation sang the Latin Gloria with great confidence, scarcely needing to glance at the words and music so often practiced in earlier years.  The mix of traditional and modern music was very fitting for a celebration spanning a century.

In his sermon, Bishop Mark congratulated the Parish on a wonderful celebratory year and the existence of an antique and beautiful church. The building serves the celebration of the Sacraments, and provides an oasis of calm. We can count its age, and measure its length. But what it contains – Grace, Faith, Joy – can never be quantified. The church building is completed, but God has not finished building his Church.

During the consecration, the blended voice of all the priests was powerful and beautiful to hear.  The response to the Prayers of Intercessions (Take us Lord, renew us and use us) summed up the spirit that has permeated this year of celebration and commitment.

Mass was followed by another reception in the Parish Hall, with sparkling wine, an abundance of mouth-watering canapés served by tireless young waitresses, (although the Hall was so full of people they had difficulty making their way through the crowds). James Madden, as Chair of the Centenary Planning Group, gave a short speech, thanking all who had worked so hard, but noting particularly the contributions of Lorraine Richards “a committee in herself” and Parish Office Manager Jane Cheyne “indefatigable and irrepressible”.  At about 9.30 there was an exodus to witness the fireworks over the church steeple, and then a rush back to enjoy yet another wonderful celebratory cake, this time in the form of the number 100.

As guests and parishioners left, the tireless team of workers were frantically labouring to set the Hall to rights, as only hours later it would be used as a polling station for the national and local elections. Indeed, the next day the church was open again, and with a number of parishioners inviting them in, around one hundred of the many voters also took the time to pay a quick (or sometimes not so quick) visit to the  church. Everyone admired the flowers and the beauty of the church, but even more importantly, a few expressed an interest in coming again.

Many people made the Centenary Masses  a great success, and in due time,  a list of everyone who contributed will be placed on the website, as part of our Centenary Record.

The names of some are listed below, but it is always difficult to ensure that everyone is recognised. If there are others whose names should appear here, please take the time to send a message to the office, so that this can be a full and complete record of a very memorable occasion.