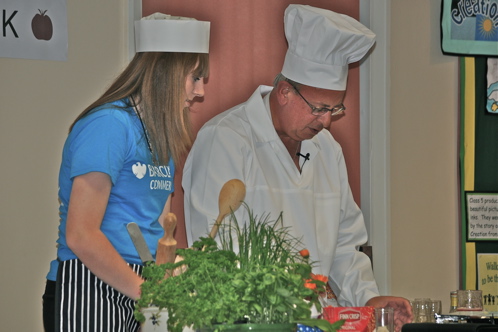 On Saturday 24th June, ‘Ready Steady Cook’ came to Holy Ghost! Accompanied by a team of helpers, Fr Philip put on his Chef’s hat and clothes and attempted to make a sumptuous range of dishes from the new Parish Cook Book. From Lemon and Sardine Pâté to delicious Chocolate Wacky Cake, an anticipating audience watched as Fr Philip showed off his culinary skills. In between his demonstrations of five of the recipes taken from the book, the audience were given the chance to enjoy a sample of each dish, (which had been prepared earlier by our Parish Cooks) as well as the odd glass of alcohol or non alcoholic orange juice!

Fr Philip’s presentation of cooking was very successful and humourous!. He did a fantastic job as he entertained the audience with a variety of quips and jokes, aided by his chosen helpers for each dish. The evening ended with a prize draw and an auction of 3 cooking utensils (signed by Fr Philip) which also raised money towards parish funds.

Over all, the evening was very successful, raising vital funds, £750 of which, will be matched by Barclays penny for penny. None of this would have happened without the many hours spent by Lorraine compiling the cook book and she sends her thanks to everyone who gave us a recipe.

Our thanks goes to Jane, Lorraine and Wendy for their wonderful cooking, Elisabeth, Alice, Emily, Luke and Ryan for being such brilliant and well organised waiters, Derek for the music and microphones, St Joseph’s for the use of the stage, and to Bernadette for the many hours she spent clearing the debris and returning the kitchens to normal! Most of all we thank Fr Philip for being such a sport (and a great cook!) A great evening was had by all!