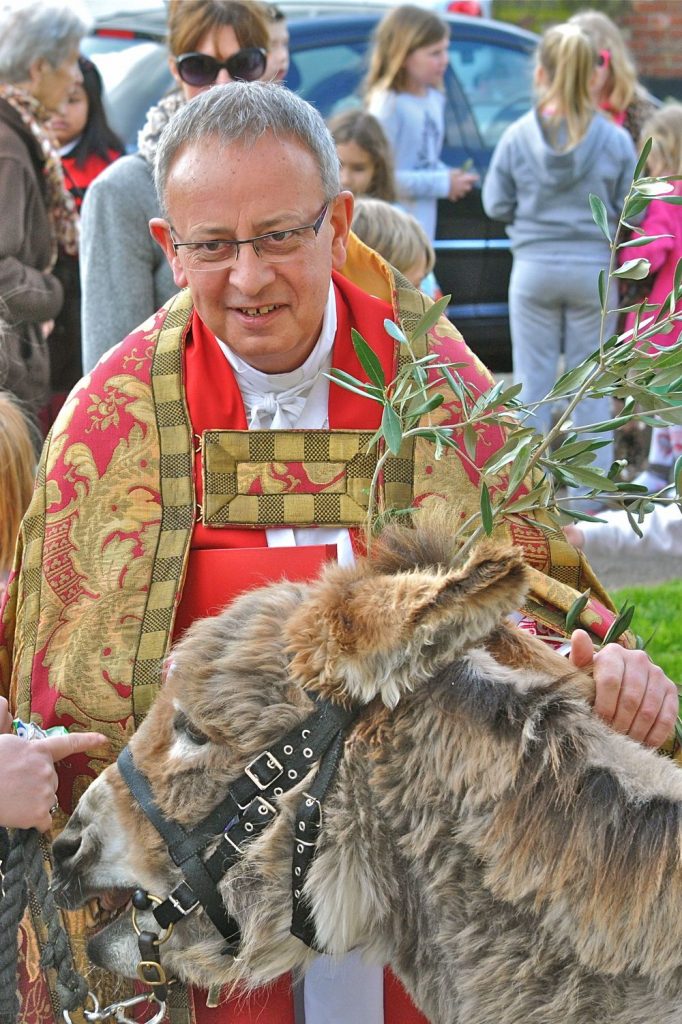 A day of fitful sun and cloud, reflecting the mix of joy and sorrow that is the essence of Palm Sunday, saw preparations at Holy Ghost church in Exmouth for the Palm Sunday procession. Sacred music played softly as the space in the forecourt of the Holy Family Convent filled with a multitude of small children, their parents and many other parishioners, eager to pet, stroke or simply admire Corrie the donkey, patiently waiting her cue to start the procession.Father Philip, resplendent in a cope of gold and red, greeted the assembled crowd,and the chatter died down as the ceremony began with a blessing of the palms.

We do not know what kind of palms the crowds were waving as Christ entered Jerusalem, but this Sunday, the adults and many children, raising their arms as high in the air as possible, waved olive branches. Some of the young ones bore colourful palms, such as those traditionally carried on Palm Sunday in Poland. Made of twisted dried grasses and flowers, their mixed colours are symbolic of Holy week – the green of palms joyously waved, the purple of the passion, the red of the sacrifice and the yellow of the glorious risen sun. Following the prayer of blessing, Father Philip sprinkled the crowd and their palms with Holy Water. The incense was lighted in the thurible, and Deacon Terry Enright read the gospel from Matthew, recounting Jesus’ triumphant entry into Jerusalem. The procession then began, headed by Major John Dawson carrying the thurible, preceding the crucifix, adorned with palms and scarlet ribbons. The crowd followed the humble donkey, mainly in silence but with the occasional shout of Hosanna, winding slowly through the paths of the convent garden. As parishioners found their places in the rapidly filling church, the smaller children, including some dressed in biblical fashion, assembled at the front entrance. As the congregation sang “Ride on, Ride on in Majesty”, donkey Corrie was led up the aisle to the altar, followed by the children and Father Philip. As Mass began, Corrie made a discreet exit through the side entrance, where she waited to greet the children again, who had a second chance to pat her as they made their way to the Hall for the Children’s Liturgy. Thanks to the Donkey Sanctuary at Sidmouth, and an especial thank you to Corrie, who stood in at the last moment as Donkey Trixie was unwell.