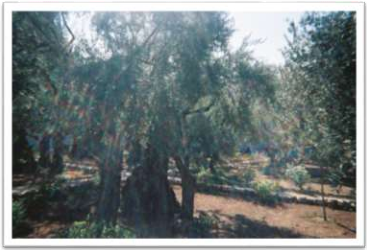 2 disciples set off for a largely silent retreat under the guidance of Bishop Emeritus Christopher Budd on an overnight flight to Tel Aviv. We arrived at 5am to a warm welcome and superb hospitality from the Filippino ladies who look after the retreat house for the elderly French sisters who look after the holy site of Kiriat Yearim. According to 1 Sa 7:1 and 1 Chr 13:5 this is the site where the Ark of the Covenant was kept following its recovery from the Philistines who had taken it following one of the many spats between the Israelites and Philistines. As it is also a possible site of the post-resurrection meeting of Jesus with the 2 disciples on the road at Emmaus, it is a holy site both for Jews and for Christians.

Under  Bishop  Christopher’s gentle guidance we examined the Beatitudes, in order to focus on the Lord at all times, and continued with Matthew’s gospel concluding with the Passion and Resurrection.

The silence was split into two with several days of site visits before, after and in the middle. We first visited the “hill country of Judea” where Mary went to visit Elizabeth at En Kerem, and the probable site of John the Baptist’s birth nearby. In the middle we went to Bethlehem through the separation wall for Mass at St Katherine’s next to the Orthodox church which houses the grotto where due to it being the quiet season of midwinter we were able to visit the birthplace of Jesus and remain several minutes there. The 4 following days we visited Jerusalem, first to the Mount of Olives where we had for the day a superb Palestinian Christian guide, Mass in a cave in which the other disciples might have sheltered when Jesus took Peter, James and John to support him before his arrest, and from the top of the Mount of Olives looked over Jerusalem and walked down to Gethsemane. Most moving were the 2 days following when we had the opportunity to pray the way of the cross as Jesus took it as nearly as possible given the city had to be rebuilt following the destruction by the Romans in AD 70. We also had a visit to the Turin Shroud exhibition where another very knowledgeable guide took us through the process of crucifixion and examined the pictures and replica of the shroud. To me all the evidence presented points to this really being the shroud of Jesus. The combination brought Jesus’ Passion and crucifixion very close for us. We  had  many  other interesting visits – to Yad Vashem  the  Holocaust memorial, and on the last day the Israel Museum where our superb South African Jewish guide held us spellbound (despite the wet and freezing weather) as we went round the splendid outdoor model of Jerusalem before the destruction of AD 70., and visited the Shrine of the Book, a museum about the Dead Sea scrolls. 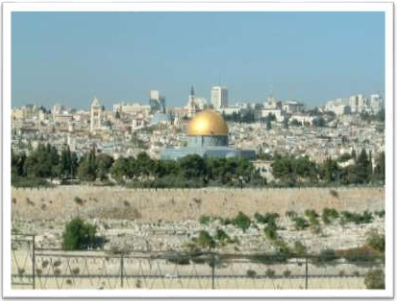 We saw a film on the first evening of interviews with various people from all sides concerning the desire for peace in the Holy Lands. Our organiser and group leader Della Shenton (5th Gospel retreats) has also set up a charity Parishes for Peace in order to help the Christian refugees in Jordan who have fled from Syria and Iraqis fleeing from Isis. Due to their betrayal by their Muslim neighbours they cannot go to the refugee camps as there are Isis cells in the camps. Coupled with the destruction of their home villages and towns this means returning home is not an option so they turned to the local churches in Jordan who housed them in tents and then portacabins. They will need both material and psychological support while they await the outcome of visa applications for other countries; these are people who will be an asset wherever they go with qualifications as doctors, lawyers, teachers etc. The charity aims to help them by providing English lessons, support for children attending Jordanian schools, support for the women. My hope is that I might be able to visit the refugees on a future study tour in order to help with awareness and fundraising.