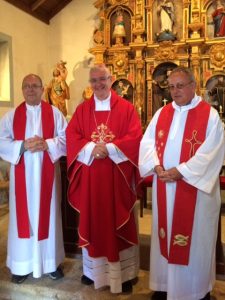 On September 27th 2017 Pope Francis launched the ‘Share the Journey’ campaign in order to show his solidarity with refugees and migrants forced to flee their homes because of war, persecution, poverty and natural disaster.

Inspired by the Pope’s message CAFOD joined the campaign to bring the plight of displaced persons to the world’s attention and to call on governments to agree on two new global agreements at a meeting at the United Nations in September 2018. The CAFOD organiser from the parish of the Holy Family in Exmouth suggested that the pilgrims on the Diocesan Pilgrimage to Santiago de Compostela should use one day’s walk on the camino to show their concern for those forced to leave their homes and families. It was planned that the diocesan pilgrims would walk on Saturday May 12th. Some pilgrims decided they would do the whole walk of 11 miles, others would walk for 4 miles and others who might struggle with the terrain on the camino would walk laps around Obradoiro Square in front of th 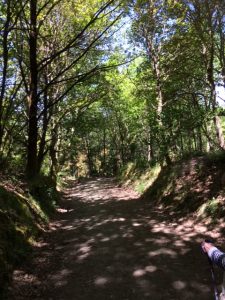 So on Saturday morning we travelled from Santiago to a chapel at Outiero and said the ‘Share the Journey’ prayer together on the coach. At Outiero, the place where the body of St James is reputed to have lain before being taken into Santiago, Bishop Mark celebrated Mass assisted by Canon Keith and Fr. Philip. The stone chapel was very simple and as the Bishop delivered his homily the noisy cockerels outside added to the simplicity of the rustic setting.

After Mass we had a group photo taken and then those who planned to walk laps of the square outside the Cathedral were taken back to Santiago by coach. 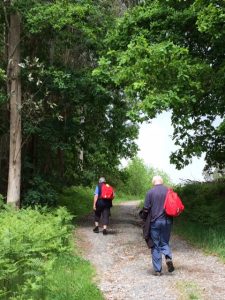 The pilgrims who were walking along the camino including Bishop Mark, Canon Keith and Father Philip, soon fell into step with others whose strides matched their own. The walk took us through beautiful countryside. We saw masses of wild flowers, smelled fragrant eucalyptus trees and heard the songs of different birds which we realised was in sharp contrast to the walks undertaken by displaced persons from around the world. 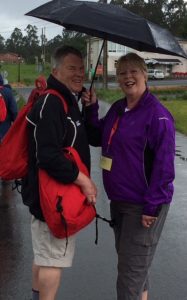 the weather was very changeable and we had to cope with rain, hailstones, wind and cold. In spite of all the challenges we carried on regardless and it was wonderful to do this walk with everyone encouraging and supporting each other. CAFOD is aiming to get people to walk 24,900 miles which is the distance around the world and on Saturday May 12th the diocesan pilgrims contributed 289 miles to that number.

You can download the original review by clicking here