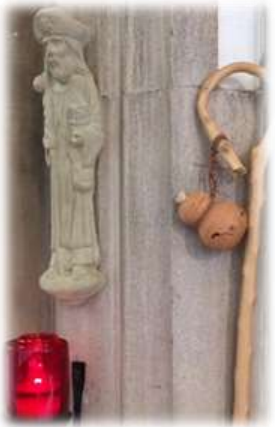 On July 25th, the Feast of St James, pilgrims who had journeyed on the Diocesan pilgrimage to Santiago de Compostela in May were invited to a reunion at Holy Ghost Church Exmouth. The pilgrims who attended the reunion came from a wide range of parishes across the Diocese with people travelling from as far afield as Camborne in Cornwall and Sherborne and Poole in Dorset.

They were joined by friends and family members, parishioners from Holy Family Parish and Sisters from the Holy Family Convent. The evening began with Mass celebrated by Bishop Mark O’Toole who was assisted by Canon Keith Mitchell, Father Philip Austen and Deacon Terry Enright. After welcoming everyone, Bishop Mark told us that he was pleased to be using incense during the Mass but said unfortunately it wouldn’t be quite as spectacular and dramatic as when we witnessed the Botafumeiro in action during the International Pilgrim Mass in Santiago! 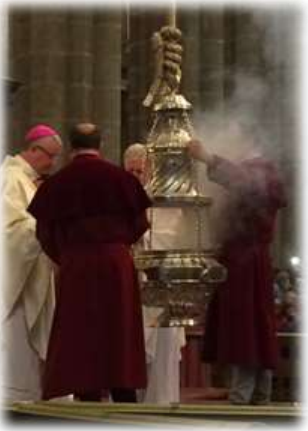 Canon Keith delivered the uplifting homily and spoke on behalf of many of the pilgrims when he said he had become more interested in the life of Saint James and had felt closer to him since being on the pilgrimage. He reflected on what we had learnt while walking the Camino. He said that through the life of James we learn about discipleship and explained that discipleship is about faith and service.

Canon Keith told us how James had preached the gospel to the people of Spain before returning to Jerusalem where he was martyred and reminded us of how the disciples of St James brought his remains back to Galicia by boat and carried them inland to be buried at Santiago de Compostela. 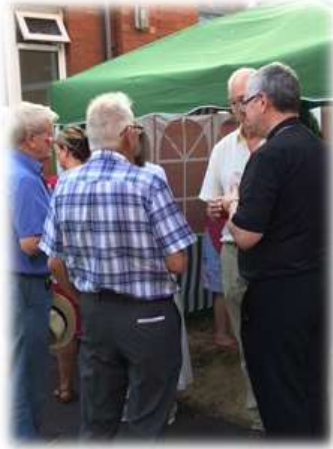 When Mass ended Father Philip thanked everyone for coming and said he hoped we would have a good evening even though we would not have the spectacular firework display that pilgrims would be having in Santiago. We then had an opportunity to pray at a statue of St James that Father Philip had brought back with him.

After Mass there was a shared supper which had a Spanish theme. There were delicacies such as jamon serrano, chorizo, Spanish olives, patatas bravas and not one but two delicious Santiago cakes. It was a beautifully warm evening and as we sipped glasses of tinto de verano (red wine of summer) outside in the evening sun it was good to catchup with all the friends we had made on the pilgrimage before going into the hall for a delicious meal. 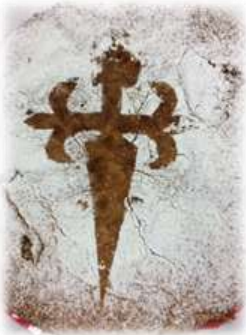 been put together by Eric Howard ably assisted by his wife Philippa. The photos on the DVD reminded us of all the wonderful places we had been and Eric had thoughtfully added headings, beautiful music and inspiring quotations to the photos which served to personalise the DVD.

Going on pilgrimage brings many blessings. One of which is sharing such a truly inspiring experience with others. During our pilgrimage to Santiago there was an amazing camaraderie among the group. At this wonderful reunion this camaraderie was evident once again. 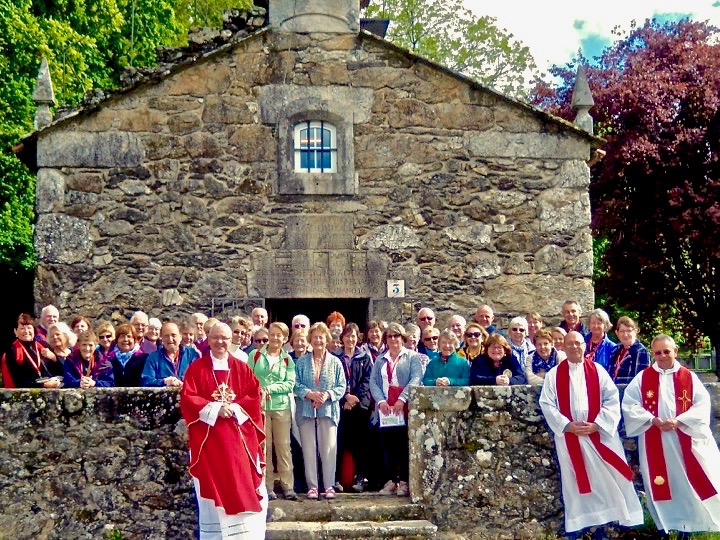