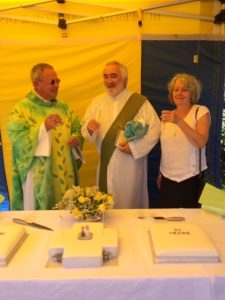 During this morning’s mass, parishioners, visitors and guests celebrated with our Deacon Terry Enright, on the 25th Anniversary of his Ordination by Bishop Christopher.

We were joined by Father Robin Ellis and Deacon Ed Channing who assisted with the celebration. Father Philip focused his homily on service to and within the community and the support that Terry’s wife, Helen, had given over the years of his Diaconate.

After mass the congregation, Terry, his family and friends all decamped to the garden for an outdoor informal celebration. We were treated to glasses of Prosecco and Bucks Fizz for the toast and a slice of one of three special celebration cakes.

There was a short address from Eric Howard recalling Terry’s years of teaching at Rolle College, his ordination and his achievements within the Church. Terry responded and expressed his gratitude to everyone. Helen and Terry were then presented with an ornamental tree for their garden, before starting to cut the beautiful cakes.

Thanks again to the wonderful weather people took the time to chat with Terry and his family and it was a heartening experience to witness the diversity and all ages representing our Catholic Community here in Exmouth and Budleigh.