On Monday December 10th parishioners from The Holy Family Parish, Exmouth and Budleigh Salterton were invited to an Advent Day of Reflection at Sidholme. They were joined by friends from other parishes including some who had journeyed on the Diocesan Pilgrimage to Santiago de Compostela in May.

After a welcoming coffee we congregated in the Music Room where we were warmly welcomed by Fr. Philip Austen. He began by reading excerpts from a passage by Isaiah after which we joined together in saying the Lord’s Prayer. We were all given a booklet entitled ‘Becoming John the Baptist’ and Fr. Philip drew our attention to the picture on the front cover which showed John the Baptist, in silhouette, pointing the way.

He explained that this picture could be any one of us pointing out to other people the way to Jesus. Father then discussed the life of John the Baptist beginning with the annunciation of his conception by the Angel Gabriel. He showed us some beautiful icons depicting John’s life and gave us Biblical references taken from the first three chapters of St. Luke’s Gospel.

Fr. Philip then referred to a morning meditation made by Pope Francis on the Feast of The Nativity of St John the Baptist in 2014. In this meditation, His Holiness used three words – Prepare, Discern, Decrease – to describe ‘the spiritual experience of John the Baptist’. The Pontiff declared that John’s first vocation was ‘preaching the baptism of conversion’ and preparing ‘the hearts of the people for an encounter with the Lord’. Pope Francis then stated that John’s second vocation was ‘to discern who the Lord was’, which he did through a revelation by the Holy Spirit. John’s third vocation, the Pope said, was to ‘humble himself and decrease so that the Lord would increase’. The Holy Father continued his meditation by declaring that a Christian vocation must also include these three elements. He said that like John, ‘a Christian doesn’t proclaim himself, he proclaims another, he prepares the path for another: to the Lord’.
And he continued by saying that a Christian ‘must be a person of discernment’ and must know ‘how to humble himself so that the Lord may increase’.

Father then drew parallels between our lives and that of John the Baptist. He explained that the 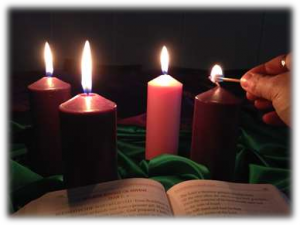 key to evangelisation is being confident in what we are talking about and told us we can grow in confidence through our personal holiness. He said that it is through our actions that
we show our Christian witness and he explained that like John, we don’t need to draw attention to ourselves in order to show others the way to Christ. Fr. Philip then said that in order to be a Christian we need to act out the Beatitudes and do what Jesus told us in the Sermon on the Mount.

On tables spread around the room Father had left cards depicting each of the eight Beatitudes. Next to each picture there were quotations taken from ‘Gaudete et Exsultate’, Pope Francis’ ‘Apostolic Exhortation on the Call to Holinessin Today’s World’. We were then given time to visit each table in order to read and reflect on each of the Beatitudes.

As it was a sunny morning some of the group took the opportunity for silent reflection whilst sitting or walking in the extensive grounds. After an hour of reflection we came back to the Music Room where we sat in small groups. Each group was given an excerpt from ‘Gaudete et
Exsultate’ to discuss and think about. This discussion was followed by Midday Prayer. After which, we went into the dining room for a delicious lunch.

After lunch we met again in the Music Room where we reported back on what had been discussed in our small groups. We also had the opportunity to ask questions about anything which had been discussed earlier in the day. Father Philip then celebrated Mass. In the first reading from Isaiah we heard the words in which Isaiah prophesied that ‘God is coming’ and that when He does come, He will transform people’s lives and He will cure the blind, the deaf and the lame. We then heard how this prophesy was fulfilled when we listened to the story in St. Luke’s Gospel of how a lame man was brought to Jesus by his friends. In his homily Fr. Philip explained how much the man’s friends had wanted Jesus to cure him and emphasised the extent of their faith as they struggled to get the man in through the roof. After Mass, tea was served which gave us another opportunity to speak with friends before we left.

We were all very grateful to Fr. Philip for organising this Day of Reflection which was very well attended. It was wonderful to have the opportunity to step back from the hustle and bustle of
Christmas preparations and think quietly, not only about preparing ourselves for the coming of Jesus at Christmas but also to reflect on how we can become witnesses, like John the Baptist, ready to show others our joy at our personal relationship with Christ.